skip to main | skip to sidebar

My dad is in a nursing home again. I am wondering if he will ever come home again. I have conflicted feelings about it. He was not a very good dad and I never felt that feeling about my dad that many girls have felt about their dad. When other people talking about how sad they are that their dad passed away etc it has made me jealous that I do not feel the same way about my dad. Yes it will be sad when he dies, just like it would be sad when anybody dies but I will not feel that great loss of my dad. Or maybe I will...I guess it may not hit me until he dies. He is not doing good at all. I went to see him last week for a few minutes and he does not look like the same man. He has lost tons of weight. I think he has lost probably almost 50 pounds. He has been unable to eat for almost 10 days now. He thinks it is from one of his medications. I think it could be possibly from a mass or something because he says that he can not eat because after one bite he feels stuffed and bloated. My dad has always had an appetite so something major is wrong. He is waiting to get his bone marrow biopsy/results but no more has been said about it. He has not even been able to eat his snickers bars that we brought him. He has been able to drink some stuff but not much. Yesterday they switched his diet to soft foods and he was finally able to eat some mashed potatoes. He was going to try some scrambled eggs and cream of wheat this morning but I am not sure if he ended up eating it or not.
It seems so unfair that this is what ends up to everybody who lives to be old. Where is the fairness in having to live out your last years in such a manner. Unable to eat, walk, use the bathroom etc. Almost seems like a punishment for living too long.
My dad hopes that he can get strong enough to come home but I think his expectations are set way too high. He does not want to come home until he can walk on how own. He is in a wheelchair now and it seems like he gets weaker everyday. I think he is in denial about his condition and that he thinks that he will get better and be back to his old self. I do not know which is better...to be in denial about his condition or to fully understand his condition. I guess for now denial is fine, it is not hurting anything and if that is what he needs to believe so he can get through each day then that is what he will do and I will not tell him differently. I just go along with what he says when he says he is going to be better next week, or the next week, or the next etc..
On a cuter note..Sterling says that when I am old and sick he will keep me home and take care of me. He said that a nursing home did not seem that nice and that if I was in one he would have to stay there all the time with me and he would not want to do that so he would just have to keep me home lol..I thought that was very sweet of him.
Posted by Shannon at 4:40 PM No comments:

I know it has been awhile and I need to write an update and to make sure to write on a more regular basis. The holidays were not as bad as I had thought they would be and it was not very stressful either. My dad is back in a nursing home and he is not doing good at all...I really do not think he is going to ever come back home. I will write an update post later and I really plan to write daily because it helps me to keep a journal of each day.
My nieces came to visit a few weeks ago. They each had American girl dolls and they were wanting some clothing for the dolls. I made some crochet hats, scarves and ponchos for the dolls but forgot to take pics. I also made a quilt and pillow for Briannas doll but did not get a chance to make one for Aly yet. I also made a night gown and a 2 piece outfit. They are both peasant style so they were pretty fast and easy to sew up. I have some more cut out and have some other items like hair ties etc that I want to get sewn. Here is 2 of the items. The dress/nightgown did not turn out as well as I had hoped but it still is nice. 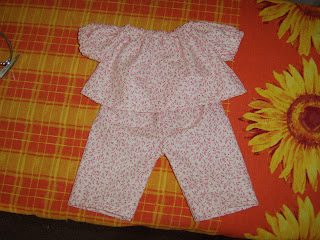 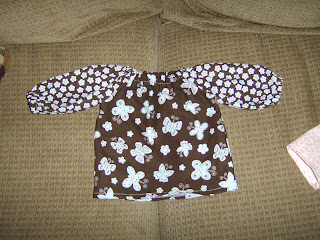 Posted by Shannon at 3:12 PM No comments:

Shannon
Tucson, Az, United States
I am a 38 year old mom to 4 kids. I am married and live in Tucson Az. I used to work as a nurse and respiratory therapist but am now on disability. I love to do lots of different crafts as well as read and watch TV. Make sure to go all the way to the earliest post on my blog so you can read more about me and what made me decide to start blogging. Feel free to leave comments as well. I love to come to my blog and find comments left for me.